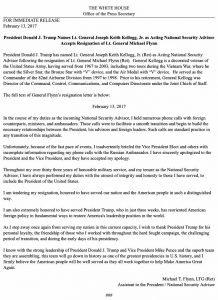 On February 13th, General Michael Flynn resigned as National Security Adviser to President Donald Trump over his phone talks with the Russian ambassador, according to the latest White House documents released. Media reports from leaked information accuse Flynn of allegedly discussing the U.S. sanctions with Russia before Donald Trump took office. He is said to have misled officials about his call with Russia’s ambassador before his own appointment, BBC reported.

Under the law, private citizens cannot conduct US diplomacy. It is an illegal activity, BBC reported, citing U.S. code for Private correspondence with foreign governments.

Initially, Flynn denied having discussed sanctions with Ambassador Sergei Kislyak. According to other media reports, the White House had been warned by the justice department about Flynn misleading senior officials and being vulnerable to Russian blackmail.

Flynn, in his letter of resignation, said he had “inadvertently briefed the vice-president-elect and others with incomplete information regarding my phone calls with the Russian ambassador.”

However, some Russian lawmakers have defended Flynn. Senator Alexei Pushkov said on Twitter that Flynn had been “forced to resign not because of his mistake but because of a full-fledged aggressive campaign”. He tweeted that “Trump is the next target”.

Flynn advocated for a softer policy on Russia. He was criticized by democrats and questioned were raised for his perceived closeness to Moscow. Senior Democrat Adam Schiff said that Flynn’s departure would not end questions about contacts between Trump’s election win and Russia. Congressional democrats John Conyers and Elijah Cummings want the justice department and FBI to give a classified briefing to Congress on Flynn.

“We in Congress need to know who authorized his actions, permitted them, and continued to let him have access to our most sensitive national security information despite knowing these risks,” the democrats said in a statement.